(Beatles) Louise Harrison Caldwell – All About the Beatles sealed 1964 LP

A sealed copy of All About the Beatles by George Harrison’s sister, Louise Harrison Caldwell.

Offered for sale is a still sealed copy of All About the Beatles by, Louise Harrison Caldwell, the sister of George Harrison of the Beatles.

About this copy: This copy of All About the Beatles is a still sealed original pressing from 1964 on Recar Records.  The record is presumably new and unplayed, and the album likely also includes the mail-in card for the Beatles photo album, which is almost always missing. (see photo to see what the card looks like)

While the album is still sealed, the wrap is split along the entire bottom edge of the cover and a bit of wear at that edge.  There is also a small (1″ x 2″) tear in the shrink wrap where a price sticker was removed, and a very small (1/2″ or so) piece of the cover has been torn away.

While this isn’t a perfect example of a sealed copy, the wrap is otherwise tight and there are no holes, saw marks or tears in either the wrap or the cover.  This title is quite hard to find in any condition, and this is only the second copy we’ve ever had for sale and the only still sealed copy we’ve ever seen.

A nice copy of a very rare Beatles-related album.

Background: In 1964, when the Beatles first became a worldwide sensation, every record company in America tried to find something that they could release to allow them to cash in on Beatlemania.  Some labels issued early recordings by the band, others released albums by soundalike groups, and still others released interview albums.

One of the more interesting albums in the latter group is All About the Beatles, credited to Louise Harrison Caldwell.  Mrs. Caldwell was George Harrison’s sister, and she had moved to the United States in the 1950s.  At one point, before becoming famous, George had come to the U.S. to visit his sister, and he was the only member of the group to have visited the U.S. prior to their becoming famous.

Tiny Recar Records from Minneapolis, Minnesota managed to secure an interview with Louise Harrison Caldwell and put that interview on record.  The album also included a card for a mail-in offer for a Beatles photo album, which is almost always missing when copies of this album turn up for sale.

As with most of these attempts to cash in on Beatlemania, All About the Beatles was only available for a short time, as the window of opportunity to sell anything to Beatles fans was pretty short.  The album did not sell well and today, the album is one of the harder titles to find among early Beatle-related albums. 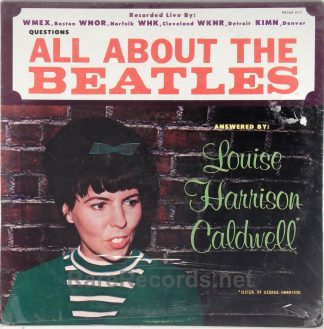