Offered for sale is an original Japanese promotional copy of the 1977 LP Live at the Hollywood Bowl by the Beatles.

About this copy: This copy of Live at the Hollywood Bowl is an original Japanese promotional copy, with promotional markings printed on the labels.

The cover is VG, with no tears or splits, but moderate wear and foxing.  The obi is VG, with wrinkles and small tears at the top and bottom edge.

The lyric insert and custom inner sleeve are included and are both M-.

A nice copy of a terrific LP that’s quite hard to find as a promotional copy.

Background: While the material on Live at the Hollywood Bowl was recorded in 1964 and 1965, the album wasn’t released until 1977, due to technical issues with the recording.  It might not have been released at all if not for the earlier release of the Live at the Star Club LP, which inspired Capitol to finally issue an “official” Beatles live album.

Despite the long time in reaching store shelves, the album reached #1 on the UK charts and #2 in the U.S.

Allmusic.com gave Live at the Hollywood Bowl a 4 star review:

Capitol Records initially planned to release a live album from the Beatles in 1964, recording the band’s August 23 concert at the Hollywood Bowl. Nobody at the label found the results satisfactory so they attempted it again almost exactly a year later, taping the August 29 and 30, 1965 shows at the Hollywood Bowl but, once again, it proved hard to hear the Fab Four from underneath the roar of the crowd, so those tapes were also shelved. They remained in the vaults until 1977, when Capitol president Bhaskar Menon asked George Martin to assemble a listenable live album from the two sets of Hollywood Bowl tapes, all with the idea of combating the rise of bootlegs and quasi-legit Beatles live albums. It was a difficult task, yet Martin and engineer Geoff Emerick managed to assemble a 13-track LP of highlights that was quite well received upon its 1977 release yet managed to earn a reputation as something of a disappointment in part due to the screams that overwhelmed the band…. Perhaps the Beatles weren’t able to hear themselves well on-stage but that’s hard to discern from these performances, which are tight and swinging with the band clearly deriving energy from the audience. 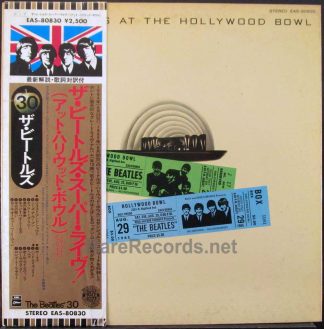