A sealed original stereo pressing of the Beatles soundtrack to A Hard Day’s Night.

Offered for sale is a still sealed stereo early pressing of the Beatles soundtrack to A Hard Day’s Night, issued in 1964 with the unplayed record still sealed in the plastic inner sleeve.

Stereo first pressings are actually rarer than mono issues, as most people who bought the album when new bought it in mono.

About this copy: This copy of A Hard Day’s Night is an unplayed original 1964 U.S. stereo first pressing.

The cover three lines of publishing credit (this was later corrected to four.)  The cover and label correctly list “Tell Me Why,” but “I’ll Cry Instead” is listed as “I Cry Instead.”

The cover is VG+, with slight corner wear and some foxing on the back cover.

While the cover has been opened, the record is still sealed in the original plastic inner sleeve.  The record has never been opened or played.

A beautiful example of a terrific album.

Background: When the Beatles starred in their first film, A Hard Day’s Night, two different albums were released worldwide to coincide with the release of the film.  In most of the world, a Beatles album bearing the title of the film was released, containing the eight songs from the film along with six others.  This album was released by the Beatles record label, Parlophone.

In the United States, the soundtrack rights went to the film’s producer and distributor, United Artists.  Because they had rights to only the eight songs in the film and not the additional six songs, they included four instrumental tracks by the George Martin Orchestra that had also appeared in the film to fill out the album’s running time.

Unlike the UK LP, which was essentially a new Beatles album, the American A Hard Day’s Night album was a true film soundtrack, and the album was issued in both stereo and mono.  The stereo version of the album contained all of the songs by the Beatles in rechanneled, or “fake” stereo, making the mono album the more desirable pressing.

The mono version of the album was deleted in early 1968 and is quite rare compared to the stereo version, which stayed in print until the late 1980s. 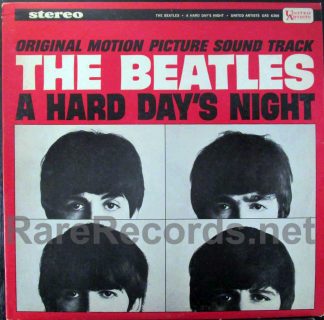