View cart “Bob Dylan – The Times They Are A-Changin’ sealed Mobile Fidelity LP” has been added to your cart.
Sale!

A sealed original U.S. pressing of Magic Christian Music by Badfinger, issued on the Apple label.

Offered for sale is a still sealed original U.S. pressing of Magic Christian Music by Badfinger.

About this copy: This copy of Magic Christian Music is an original 1970 U.S. issue on the Apple label.

The wrap is 100% complete, with no rips, tears or holes.  There is a hype sticker attached to the wrap that says “CONTAINS THE HIT ‘COME AND GET IT'”

Aside from a tiny bend in the upper right hand corner, this copy is pretty close to perfect.

A nice copy of a scarce Badfinger LP.

Background: Released in 1970, Magic Christian Music was the second album by Badfinger and the first to be credited under that name, as their previous LP had been credited to the Iveys.

Six of the songs from the Iveys album, which was only released in three countries, are included on the album.

If Badfinger’s debut album Magic Christian Music sounds patchy, there’s a reason why: It was assembled from three different sources. Although the title suggests that the record is a soundtrack to The Magic Christian it isn’t. It’s a hodgepodge, containing the group’s three contributions to the film, six highlights from the band’s pre-Badfinger album Maybe Tomorrow (released when they were known as the Iveys), an alternate take from Maybe Tomorrow, and four new songs. It’s little wonder that it doesn’t hold together, winding up as a document of Badfinger’s unharnessed potential. … They might not always deliver on that promise on Magic Christian Music, but with its appealing melodies, lite psychedelic flourishes and, yes, Beatlesque harmonies, it’s an enjoyable artifact of its time.

You can listen to “Come and Get It” here: 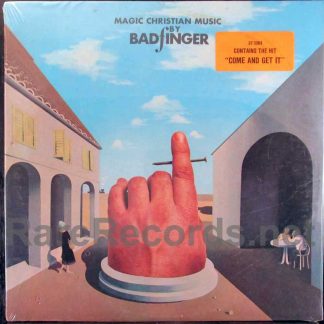