Offered for sale is a scarce reissue of Maybe Tomorrow by the Iveys, issued in 1987 on the EMF label.

About this copy: This copy of Maybe Tomrrow is new and unplayed, but we opened it as we had reason to think it might be warped.

It’s flat, though it does have some storage marks on the vinyl from reactions with the paper inner sleeve.

The cover is M- and still has the original shrink wrap.

We’ll call the disc VG+, just to be safe, but the record is literally unplayed.  The record does play with some surface noise, as the reissue was mastered from vinyl, rather than from a master tape.

A nice copy of a scarce Iveys/Badfinger LP.

Background: Original copies of the first album by the Iveys, (later to be renamed Badfinger) Maybe Tomorrow, are among the most collectible records ever issued by the Beatles’ Apple label.

Originally intended for worldwide release, the album was ultimately issued only in Germany, Italy, and Japan.  Copies from all of those countries are rare, and the original album rarely turns up for sale.

The album returned to the market in 1987 as an unauthorized reissue by EMF Records, pressed on high-quality virgin vinyl (though mastered from a vinyl source). 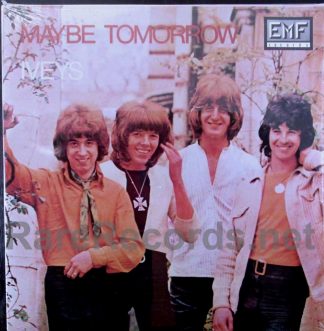