An original red vinyl Japanese pressing of the 1967 LP Up Up and Away by the 5th Dimension, complete with original obi.

Offered for sale is an original red vinyl Japanese pressing of Up, Up and Away by the 5th Dimension, complete with original obi.

This LP has a cover that is different from the U.S. cover and which was unique to the Japanese release.

About this copy: This copy of Up, Up and Away is an original 1967 Japanese issue on the Liberty label.

The cover is M-.  The obi and lyric insert are VG++, with a few minor wrinkles.

The red vinyl disc is quite clean; side 1 is VG++ with a couple of faint sleeve scuffs.  Side 2 is M-.

A beautiful copy of a terrific record that’s quite hard to find complete.

Background: Up, Up and Away, released in 1967, was the debut LP by the 5th Dimension.  It reached #8 on the U.S. album chart, helped by the title track, which reached #7 on the U.S. singles chart.

Allmusic.com gave Up, Up and Away a 3 star review:

Released in 1967, the first album release from the often maligned though talented and singular group the 5th Dimension was also a feature for Jimmy Webb, who contributed to one track and arranged and conducted the whole effort. The most well-known song remains one of the finer songs of the decade; “Up-Up and Away” matched the group’s gorgeous harmonies, with a great and ethereal yet full-bodied production. …Up, Up and Away was certainly commendable for the style forged here, but even better work was ahead for the group. 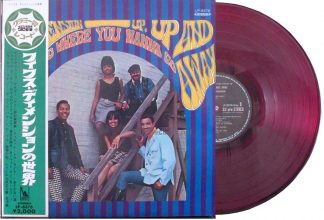